Guilt Has No Place In Music 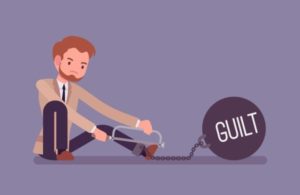 People take part in music, particularly community music for very many reasons.  Some people want to meet new people, whilst others might want to improve their voice, or perhaps work on breathing and health issues.  I’ve come to realise that there are just as many reasons to sing in a choir or play an instrument as there are singers and players.

There are also very many ways of running a music group or choir, and I’m not here to disagree with how individuals choose to run their own groups.  Personally, I am not a fan of the “term subscription” type of set up.  I’m sure you know the kind of thing, and maybe your group uses it: your director announces the new “season” of rehearsals (usually in line with school terms) and the members pay a flat fee that covers attendance at every rehearsal for the season.  This has the advantage of getting the messy business of money over and done with at the beginning of a term.  No more worrying about spare change, or wasting a few minutes at the beginning of every rehearsal.  I can see the appeal, really I can.

But the flip side is, to me, much more difficult to deal with as a choir or music group leader.

Because as leaders we have no choice.  We HAVE to be there every week, come rain or shine, to facilitate and teach the music for everyone else.  We organise our lives around those dates because it is our JOB to do that.  But our members?  They might not have the luxury.  Some of them will have full time jobs, or families that need them.  They might have no choice about taking a choir night off because they have a sick child, or desperately need to go to the dentist, or are just so ground down and worn out that they need some time to themselves.  And if they do that when they have paid for a season, it is difficult to avoid thinking that they’ve wasted their money.  If you pay for a session you can’t attend, you feel guilty about the money, and then guilty for not being present.  Guilt is introduced into your music-making experience.  And guilt eventually leads to absenteeism, and finally to them giving up.

I’m here to tell you that guilt has no place in music.  You shouldn’t feel guilty about wasting money.  I firmly believe that you should have the option to not spend the money in the first place.  I also believe that if someone says, “I can’t make it next week, I’m visiting my new grandchild!” the appropriate response should be, “That’s wonderful!  Bring pictures the week after!”, not something vague about missing out on a valuable learning experience.  I am also arguably a terrible businesswoman because I don’t make a note of who has paid me or not.  This is because sometimes people can’t afford to pay.  They don’t deserve to be shamed.  Maybe the boiler broke.  Maybe their kids needed new shoes.  Maybe they just forgot their wallet.  There is no way I could ever find a way to tell a person that they couldn’t sing because they didn’t have the money.  I would always rather that they sang and not worry about the money as opposed to going home feeling embarrassed or glum.  Can’t pay?  Don’t feel guilty!  For a brief, delightful period of time, one of my singers paid me in random items of groceries.  They’d leave a can of pop or some interesting crisps next to my money tin.  They had contributed what they could, and that was absolutely fine with me.

The guilt also works in regards to practice and here’s where I start to get a bit controversial.  I don’t believe in making people practice.  Guilting them into it NEVER works.  You know what does work?  Making them love it.  Leaving an instrument where they can’t help but pick it up.  Working on songs that they just can’t help singing.  All of that works wonderfully.  But guilt?  Not so much in my experience.  I taught primary school pupils various instruments for years, and I can tell you that the ones who excelled, who went on to great things were NOT the ones whose parents made them practice for 20 minutes every evening.  In fact, those parents generally got maybe one or two years of lessons for their child, before their child decided to give up, and never wanted to touch an instrument again.  They had literally had music guilted out of their soul.  They learned to associate music with feeling inept and guilty and wanting to do something else.  The ones who excelled didn’t practice their instruments, they simply couldn’t wait to get them out and play with them.  Nobody is born with an innate talent for an instrument, but they are born with a fascination for the sound and feel of it, and a curiosity which can only be satisfied by just playing the dratted thing.  The parents whose children excelled were much more likely to say, “Can you put that ruddy oboe down?  It’s dinnertime!”.

If you are feeling guilty about any aspect of your music practice, then think twice.  Why are you feeling bad?  How can you take the guilt out of your music?  It might involve going to a different choir, or just allowing yourself the time to recharge your batteries without worrying about the money if necessary.  And if you lead music sessions of any kind, don’t ever make your musicians feel guilty.  It genuinely achieves nothing.  If someone leaves for a different choir, smile and wish them joy with their singing.  If they are burned out, or suffering ill-health, let them go and let them know that any time they want to come back, there will be a chair and a chocolate biscuit waiting for them.  Because choirs and music groups work best as inclusive, caring communities and that is what we should be trying to create and foster.

Back on the Horse…

Confessions of a Choir Leader

Hi! My name is Annie Griffith, and I'm a Community Music Practitioner working in Lincolnshire. My Community Music Programme is aimed at getting more people involved in making their own music, rather than simply passively experiencing it as a listener. Towards this end, I put on free singing workshops, run a variety of community and workplace choirs, as well as organising concerts, group sings and concert dates throughout the year. Feel free to contact me at annie@anniegriffith.co.uk to find out more about what is happening with Community Music in Lincolnshire!