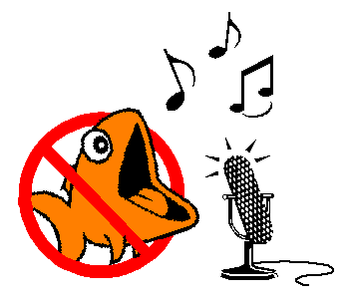 You’d be surprised at how many people come to my community choirs (and from what I’ve heard from other choir leaders – their community choirs, too) with absolutely no self-confidence in their ability to be able to sing.

Or maybe you wouldn’t.  Because maybe your story is very similar to their story.  I’ve heard it a few hundred times at least:

An adult makes enquiries about joining one of my choirs.  I am thrilled and say that we’d love to have them, and outline details of what we sing, when we meet and so forth.  They look a bit sad and say something like, “Don’t expect much.  I can’t sing, you know.”  I look concerned (privately I completely doubt what they are saying – they have a very nice speaking voice, and I’m sure that there is a lovely singer just waiting to surface), and probe a little deeper as why they think they can’t sing.  They generally tell me that when they were a child, a parent or a teacher told them to be quiet.  Told them that they couldn’t sing.  Sometimes they are told to just “mime whilst the others sing”.  Sometimes they are asked to sit down whilst everyone else sings.  Sometimes a parent or an older sibling tells them to shut up, and says that they can’t sing, so don’t try.

I’ll be honest here, I struggle with this story.  I don’t struggle to believe it, but I struggle with the white-hot rage it inspires inside me.  The people telling me this are usually older adults – often retirees – who have spent their entire lives thinking that they can’t sing.  They’ve lost out on the decades of joy and companionship that singing brings.  And WITHOUT EXCEPTION every single one has turned out to have a lovely voice, and after a few weeks of worry and concern, they have managed to join in with the rest of the choir in raising those lovely voices joyfully.

Now, full disclosure – as well as teaching choirs, I also teach music to primary aged children (4-11).  I’m a patient person, and I enjoy listening to those unfettered voices being raised in song.  It’s a wonderful thing.  I don’t shout.  I don’t victimise and I don’t get cross except for one thing.  One single thing is guaranteed to make me incandescently angry.  Never, ever, ever say to a child, “You can’t sing”.  Not if you are an adult, and not if you are another child.  No-one gets to judge anyone else’s music making in my class!  I’ve stopped whole classes to have the discussion about everyone’s voice having worth, and everyone’s voice sounding different.  We may all be born with the same voice apparatus, but we all use it differently.  Some people take a little longer to sing the note that they can hear in their heads, whilst some can do it immediately (but might really struggle with some other aspect).  That does not mean that some people can sing and others cannot.

Do not be the person that stops them singing to their baby, or singing “Hey Jude” with their best friend as the sun sinks below the horizon and another bottle of wine is opened.  Don’t do it.  Try this instead:

“Be quiet” = “I love to hear you sing!  It sounds best when we’re all singing at the same time, so try to join in with everyone else – that would sound great.”

“You can’t sing” = “You’ve got a great voice!  I love the fact that it sounds a little different – there are some fabulous musicians with voices a bit like yours – let’s have a talk about finding some of them for you to listen to…”

“You can’t sing this song” = “This song isn’t the best for you.  How do you feel about it?  Shall we find something that lets you shine a bit instead?”

“Just mime with the others” = “I want to hear everyone.  If you are comfortable singing, I’d like to hear it.  Everyone’s voice has value, and adds to the overall performance.”

You get the idea, huh?  Try to remember that every thing you say has an effect and can stay with a child for life.  What’s the worst that can happen?  Someone grows up enjoying music, and slowly getting better as they practice?

Guilt Has No Place In Music

What Do Want From Your Music?

Hi! My name is Annie Griffith, and I'm a Community Music Practitioner working in Lincolnshire. My Community Music Programme is aimed at getting more people involved in making their own music, rather than simply passively experiencing it as a listener. Towards this end, I put on free singing workshops, runs a variety of community and workplace choirs, as well as organising concerts, group sings and concert dates throughout the year. Feel free to contact me at annie@anniegriffith.co.uk to find out more about what is happening with Community Music in Lincolnshire!